Greece Tour – Greece In The Steps Of Paul

You are here: Home1 / Sample Pilgrimages2 / Greece Tour – Greece In The Steps Of Paul

We offer tours which take in the history and heritage of several denominations, including Lutheran, Presbyterian, Baptist and Methodist. If you don’t find a tour to your liking, we will create one just for you. If you should choose for us to customize your itinerary, we will do all the research for your tour so you can be sure every detail is properly handled. 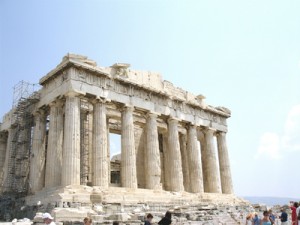 Depart from the USA on our flight to Athens. Meals and overnight on board. After dinner relax and enjoy the on-board entertainment.

Arrive in Athens and connect with our domestic flight to Thessaloniki for dinner and overnight.

We begin with a brief tour of the Biblical Thessaloniki where Paul founded the Church in 49-50 A.D. “And from there we went to Philippi which is the leading city of the district of Macedonia…” (Acts 16: 12-18). Drive along the ancient route of Paul, through mountain passes and plains to Amphipolis for a short stop to view the ancient Lion Statue. Continue to Ancient Philippi where we find two early Christian basilicas, traces of the Egnatian Way which Paul followed from the harbor of Neapolis (ancient port of Philippi) on his first visit on European soil. View the Roman Forum, the Citadel, the ancient theater, and the Ledia’s brook. Continue on a short drive to Kavala on the site of ancient Neapolis where Paul landed on the way to Philippi. Return to Thessaloniki for dinner and overnight. 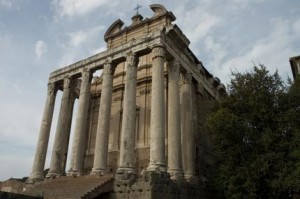 This morning we drive through the plains of Thessaly, visit the legendary home of the Greek Gods, continue on to Veria where Paul remained for several days and the scriptures say the people were ‘more noble than in Thessaloniki’. End the day in Delphi for overnight.

This morning we visit the God Apollo’s sanctuary where the oracle delivered her famous prophesies in ancient times. Visit the museum housing the bronze statue of the Charioteer, one of the masterpieces of ancient Greek art. Then proceed through the sacred way to the archaeological site visiting the different treasures, the Temple of Apollo, the theater, the stadium where festivals and games were held in honor of the sun god and the Spring of Castalia. Return to Athens via Arachova, Levadia and Thebes for overnight.

Today’s tour will touch the highlights of this center of one of the world’s greatest civilizations and the cradle of Western civilization. First visit the Acropolis and wander through the ruins of some of the most architecturally perfect buildings ever constructed. We’ll see the Propylaea, the Temple of the Wingless Victory, the Erechtheum with its peerless Porch of Maidens and Mars Hill where Paul was brought before the council. Finally, we reach the ‘harmony between matter and spirit’, the monument that ‘puts order in the mind’, the Parthenon. On a drive through the city we’ll see the National Library, the University, the Academy, the Presidential Palace, the Stadium, Temple of Zeus and Hadrian’s Arch. The afternoon is at leisure. 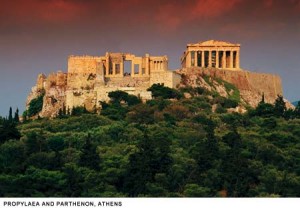 Today we tour to Corinth driving through Daphni and Eleusis. After crossing the Corinthian Canal which connects the Aegean and Ionian Seas, we will arrive in ancient Corinth. We visit the ruins of Corinth where Paul worked with Aquila and Priscilla. Included are the First Century shops, the Agora, Temple of Apollo and the Bema Seat. Still gurgling under the ruins is the water of the springs of the mighty Acropolis above, which once fed the Fountain of Pirene. Continue your drive up to Acrocorinth, in Paul’s time site of the great Temple of Aphrodite. Return to Athens where the rest of the afternoon is at leisure. Dinner and overnight.

This morning we drive to Piraeus and embark on our cruise through the Aegean to Turkey. Arrive at Mykonos in the afternoon. The afternoon is at leisure on this small and famous gleaming white Aegean Island, with its golden beaches, windmills and picturesque narrow roads. All meals on board our cruise ship.

Early morning arrival in Rhodes. This fortified stronghold was built by a Crusading Order which originated from Palestine. After your stroll, enjoy the cosmopolitan atmosphere from one of the elegant cafes on the yacht harbor, or take an optional excursion to visit the Temple of Athena on the majestic, rocky Acropolis of Lindos, with the blue Aegean beneath it and the sophisticated, whitewashed artists’ colony at its foot. Overnight onboard.

This morning we arrive in Kusadasi, Turkey. Kusadasi is a colorful harbor town and the starting point for an optional excursion to the ancient Greek city of Ephesus, site of one of the Seven Churches of Revelation. Excavation still continues in this once great and important city, which was founded in the 10th century B.C. and was subdued by both Croesus and Alexander the Great. Walk through history along streets lined with magnificent public buildings, among them the Baths of Skolasticia, the Library of Celsus, the Temple of Hadrian and the theatre. Ephesus also played an important part in the life of the Apostle Paul, who wrote an epistle to its inhabitants. This afternoon we spend our time cruising the beautiful, blue Aegean arriving after lunch in Patmos. Patmos is the beautiful, rocky island where the exiled St. John the Divine received the mystical Revelation which forms the last book of the New Testament. Optional excursion to the Grotto of the Revelation and then on to the 11th Century Monastery of St. John, which houses an original manuscript of the Gospel. Enjoy the panoramic view from this superb, fortress-like complex, high on a hill.

Morning departure from the cruise ship. Today is at leisure for additional shopping and sightseeing on your own in Athens. Dinner and overnight at our hotel.

We transfer to the airport for departure from Athens for the USA. Arrive today with wonderful memories of a magnificent journey. 4 night & 7 night cruises also available, please inquire.