You are here: Home1 / Sample Pilgrimages2 / Holyland Tours – The Holy Land In Depth

This itinerary is one of our most popular tours. It offers one extra day in the Galilee, allowing groups to visit many more sites. It also spends one night at the Dead Sea which is a unique experience. This allows groups to visit the surrounding sites, Qumran, Ein Gedi and Masada at a more leisurely pace.
This tour is offered only as a suggestion.
You may customize this itinerary and any other aspect of this tour. 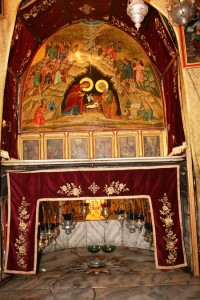 Depart from USA on our flight to Tel Aviv. Meals and overnight on board. After dinner relax and enjoy the on-board entertainment.

Arrive at Tel Aviv’s Ben Gurion Airport and meet our guide who will welcome us to the Land of the Bible and escort us throughout our stay in Israel. Israeli guides are legendary for their knowledge and dedication. Ours will instruct us on the many sites we will visit and their relationship to the religion, history, archaeology, culture, and modern life in Israel. Time permitting, visit Old Jaffa, the traditional home of Simon the Tanner and the port from which Jonah sailed. Dinner and overnight at our hotel on the coast.

Refreshed from a good night’s sleep you may wish to stroll the beach before a full Israeli Buffet Breakfast. Today we pass through the fast growing towns and farms of the Plain of Sharon enroute to Caesarea, site of major events in the lives of Peter and Paul. Proceed to Acco (Acre) and visit the crusader fortress. It’s on to Megiddo, inspiration for James Michener’s “The Source”, and prophesied site of Armageddon. Archaeological digs reveal 20 layers of civilization, including fortifications of King Solomon and the water tunnel of King Ahab. Megiddo provides a magnificent view of the fertile Jezreel Valley, at the crossroads of the ancient Via Maris. We drive through the Jezreel Valley and visit Mt. Carmel and the place where Eijah slew the prophets of Baal. On to Sepphoris, the former Roman capital of the Galilee and the famous seat of the Sanhedrin, the ancient Jewish ruling council, in the second century C.E. Sepphoris is comprised of a Crusader fortress, a Roman amphitheater and numerous impressive mosaics. Dinner and overnight in Tiberias. 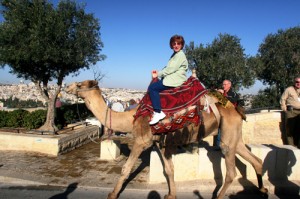 This day alone is worth the trip! We are now literally walking in the footsteps of Jesus. We will take a most memorable boat ride on the Sea of Galilee, in a replica of the ancient wooden boat used in Jesus’ day. We will visit an ancient boat believed to be from Jesus’ time found in the Sea of Galilee in 1986. We walk into old Capernaum with the ancient synagogue; on to the site of the Multiplication of the Loaves and Fishes (Tabgha), the Sermon on the Mount and the Mount of Beatitudes. You will have an opportunity for a lunch of St. Peter’s fish (optional.) In the afternoon we will journey north to Caesarea Phillipi (Banias Spring) where Peter confessed, “You are the Christ, the Son of the Living God” (Matthew 16:16.) Dinner and overnight at our hotel in Tiberias.

Today we will journey to Hazor originally conquered by Joshua in the 13th C.B.C. King Solomon began reconstruction here and King Ahab erected a magnificent palace here as well. Proceed to the mystical city of Safed, high up overlooking the Sea of Galilee. Walk the quaint cobblestone streets and visit the famous artists quarter. Continue through the rolling hills of the Galilee to Nazareth, site of Mary’s Well, and Cana, site of His first miracle. Also visit the Nazareth Village, an accurate, full-scale recreation of first-century Nazareth, including homes, storage caves and a synagogue, set on the last remaining field that was farmed by Nazareth villagers at the time of Jesus. Restoration of farm site and construction of village were done with first-century building techniques. Return to our hotel in Tiberias for dinner and overnight.

Drive along the Jordan Valley to Beit She’an to see the expansive excavations taking place at this ancient Roman Decapolis city. Stop at Gideon’s Spring where Gideon selected his soldiers to do battle against the Midianites. Continue driving south to Jericho, oldest known walled city, for a view of Mt. Temptation and Mt. Nebo, from where Moses looked upon the Holyland. Proceed to the Dead Sea. Go for a swim, rather a “float”, in the salted waters of the Dead Sea. Enjoy a relaxing spa treatment at Europe’s favorite spa’s here at the Dead Sea. Dinner and overnight at the Dead Sea. 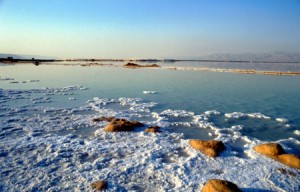 Depart to Masada, overlooking the Dead Sea, the lowest spot on Earth, where we ascend by cable car to visit the remnants of Herod’s Palace and where in 73 A.D. the Zealots made their last stand against the might of Rome. Visit Ein Gedi, fabled Spring of David, and proceed to Qumran where the Dead Sea Scrolls were found in 1947. It’s now time to “go up” to Jerusalem. We will enter the city as pilgrims did since ancient times to fulfill the words of the prophet “I was glad when they said unto me: ‘Our feet shall stand within thy Gates, O Jerusalem’ ” (Psalms 122:1-2.) Dinner and overnight in Jerusalem.

Start the day with a magnificent view of the Old City from the top of the Mt. of Olives. Take the “Palm Sunday Walk” to the Garden of Gethsemane, the Church of All Nations and drive across the Kidron Valley. Enter the Old City through St. Stephen’s Gate (Lions’ Gate) to the Muslim Quarter, visit the beautiful Church of St. Anne and the Pool of Bethesda, Pilate’s Judgment Hall, and the Ecce Homo Arch. Walk along the Via Dolorosa, into the Christian Quarter, and see the Stations of the Cross. Drive to Mt. Zion to see the House of Caiaphas and the Upper Room of the Last Supper. We will visit Bethlehem and see Manger Square, the Church of the Nativity, and view Shepherds’ Fields and the Fields of Boaz and Ruth. Dinner and overnight in Jerusalem.

We will begin the day with a visit to the reconstructed Jewish Quarter, walk through the Cardo, the original Roman street and see the amazing remains of the massive wall built by King Hezekiah. See the important excavations taking place at the Western Wall and the Southern Temple Staircase. Visit the Davidson Center and archaeological park. Also visit the City of David (or the Ophel) which was the Jebusite city that David had conquered. Since that part of Jerusalem remained in use almost up to current times, it is hard to find much that can be attributed to David. However, some believe that David built a citadel with his palace just to the north outside the walls of the Jebusite city. On to the Temple Mount, where Abraham was to sacrifice Isaac. See the Dome of the Rock and al-Aqsa Mosque that now stand there. Visit the scale model of Jerusalem as it looked in the first century A.D. End the afternoon at Golgotha (Gordon’s Calvary) and the empty Garden Tomb. Special time is planned for worship, communion, meditation and inspiration. Dinner and overnight in Jerusalem.

Today is at leisure for shopping or visiting other sites in Jerusalem. Some may choose to revisit the Western Wall Tunnel. Or Visit the Yad Vashem Holocaust Memorial. You may want to visit the Shrine of the Book where the Dead Sea Scrolls are displayed or the recently opened Bible Lands Museum. This evening we will share in a Farewell Dinner and the presentation of a Certificate of Pilgrimage to each tour participant.

Early this morning we transfer to the airport. Our guide will assist us with check-in procedures. Depart on our flight to USA. We arrive home today with wonderful memories of a visit to the Land of the Bible!