You are here: Home1 / Sample Pilgrimages2 / Middle East Tour – The Jewel Of The Middle East

THE JEWEL OF THE MIDDLE EAST
15 DAYS

Depart from the USA on our flight to London. Meals and overnight on board. After dinner relax and enjoy the on-board entertainment.

Arrive in Athens and connect with our domestic flight to Thessaloniki for dinner and overnight.

Depart London this morning for Beirut, Lebanon. We will be greeted at Beirut International airport and transfer to the hotel. Dinner and overnight in Beirut. Half the population of Beirut is Christian, the other half are Muslim and Druse.

After breakfast depart for Byblos (Gebal from the Bible). Visit the archaeological site where around the acropolis we will admire traces of all periods since the neolithic times. We discover the port where Paul embarked for Greece. Byblos is a city full of history where Christianity is dominated by the Crusaders’ passage and their building of a cathedral in the 12th century. Return to Beirut for dinner and overnight.

Early morning departure from our hotel in Beirut and transfer to the Lebanese-Syrian border. Enroute we cross over the great, fertile Bekaa Valley. After crossing into Syria, our Syrian guide will join us for the journey to Palmyra, located east of Damascus. Palmyra is first referred to in the Bible as Tadmor. One of the most spectacular sites in the Mediterranean region, Palmyra is as striking for its setting in the brown dust of an expansive, arid plain as it is for its incredibly well-preserved condition. Once a primary stop on the ancient Silk Route, Palmyra was inhabited in its prime by over 30,000 citizens. Originally constructed by Palmyreans, the city saw its prominence under Roman rule. Visit the Temple of Bel, Theater, Tower Tombs, Cardo, the museum, and wander among the myriad of free-standing columns lining the original streets. Dinner and overnight in the area.

This morning we drive west and south to the Krak Des Chavaliers (Castle of the Knights). Located in the centr al region of Syria, the “Krak”, often called the greatest castle in the world, is a splendid example of Crusader ingenuity.  While visiting this castle you will discover why it is considered a model of perfection in medieval fortification. Never conquered by invading armies it was finally surrendered to the Mamelukes in 1271. Continue to Maaloula, the only village where they still speak Syriac, or Aramaec, an Aramaean dialect which was spoken prevalently in Palestine at the time of Jesus. We visit a Greek Catholic church perched on top of the cliff with a small Byzantine chapel. This is one of the oldest, if not the oldest church in Christendom. Proceed now to Damascus, capital of Syria, for dinner and overnight.

Under French domination from 1920, Syria gained its independence officially in 1945. This morning we discover the biblical city of Damascus, rich with the traditional, centuries-old architecture of days past. Visit the Omayad Mosque which contains the tomb of John the Baptist. See the street called Straight, from where Paul began his journeys, and experience the exotic sights and smells of the ancient bazaar. Continue to the Azem Palace followed by a visit to the Christian quarter of Bab-Touma and Ananias House, where the apostle Paul escaped hidden in a basket. In the afternoon we travel across the border to Amman in Jordan and to our hotel for overnight.

This morning we depart Amman for Jerash, one of the world’s finest preserved ancient Roman cities. With its Cardo (main street) still intact and extending over one-half mile, Jerash is one of the most impressive excavations found in the Middle East. Over 100 free-standing columns distinguish this once-flourishing city founded just after the time of Alexander the Great and which became a major Roman outpost city. Rediscovered in 1806, Jerash developed a large Christian presence in the 4th Century A.D. when many of the pagan temples were converted into churches. Continue to Mt. Nebo and visit the church on top of the mountain where it is believed the Prophet Moses is buried. Proceed to nearby Madaba, visiting St. George’s Church, housing the earliest mosaic map of the Holy Land. Continue on the Desert Highway to Petra. Dinner and overnight in Petra.

This morning visit the city of Petra, lost to the world for centuries, the “Rose-Red City Half as Old as Time”, lay hidden in the mountains of southern Jordan. It had been a stronghold and capital for the Nabateans. It had a fatally vulnerable fault: its water came by aqueduct from nearby Wadi Musa. When the secret was discovered and the aqueduct cut, it fell to Rome in 106 A.D. When Rome entered, already there were Nabatean tombs, temples and monuments cut directly out of the red rock. Later we travel part of the way on horseback and the rest on foot through the deep and narrow passages which occur naturally, carved millions of years ago by erosion. The Treasury finally appears magnificently and immediately in front of us after we emerge from what seems like a hundred turns in the ravine.  Now we begin our exploration of what both the Nabateans and Romans left for us to witness. See the Street of Facades, Roman Theater and Courthouse. Later transfer to the Allenby Bridge for your assisted crossing to Israel. Proceed along the Jordan Valley to the Sea of Galilee for dinner and overnight in the area.

This day alone is worth the trip! We are now literally walking in the footsteps of Jesus. We will take a most memorable boat ride on the Sea of Galilee, in a replica of the ancient wooden boats used in Jesus’ day. We walk into old Capernaum with the ancient synagogue; on to the site of the Multiplication of the Loaves and Fishes (Tabgha) and up to the site of the Sermon on the Mount, the Mount of Beatitudes. You will have an opportunity for a lunch of St. Peter’s fish (optional). In the afternoon we will journey north to Caesarea Phillipi, (Banias Spring) where Jesus decided to return to Jerusalem. Return via the Golan Heights to the area around the Sea of Galilee where we will visit the Jordan River and have the opportunity for a baptismal service, should you desire. Dinner and overnight. 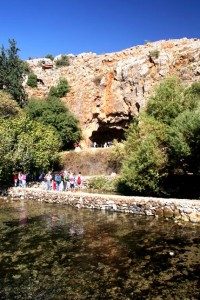 Today we depart Tiberias, through the rolling hills of the Galilee to Nazareth, site of Mary’s Well, and Cana, site of His first miracle. Continue to Sepphoris, the former Roman capital of the Galilee and the famous seat of the Sanhedrin (the highest Jewish court) in the second century A.D. Sepphoris is comprised of a Crusader fortress, a Roman theater and numerous impressive mosaics. We drive through the Jezreel Valley to Megiddo, inspiration for James Michener’s “The Source”, and prophesied site of Armageddon. Archaeological digs reveal 20 layers of civilization, including fortifications of King Solomon and the water tunnel of King Ahab. Megiddo provides a magnificent view of the fertile Jezreel Valley, at the crossroads of the ancient Via Maris. Pass newly settled towns en route to Caesarea, site of major events in the lives of Peter and Paul. It’s now time to “go up” to Jerusalem. We will enter the city as pilgrims did since ancient times to fulfill the words of the prophet “I was glad when they said unto me: ‘Our feet shall stand within thy Gates, O Jerusalem’.” (Psalms 122:1-2). Dinner and overnight.

Start the day with a view of the Old City from the top of the Mt. of Olives. Walk to the Garden of Gethsemane, the Church of All Nations and drive across the Kidron Valley. Enter the Old City through St. Stephen’s Gate (Lions’ Gate) to the Moslem Quarter, visit the beautiful Church of St. Anne and the Pool of Bethesda, Pilate’s Judgment Hall, and the Ecce Homo Arch. Walk along the Via Dolorosa, into the Christian Quarter, and see the Stations of the Cross, ending our walk at the Church of the Holy Sepulchre. Drive to Mt. Zion to see the House of Caiaphas and the Upper Room of the Last Supper. We will visit Bethlehem and see Manger Square, the Church of the Nativity, and view Shepherds’ Fields and the Fields of Boaz and Ruth. Dinner and overnight in Jerusalem. 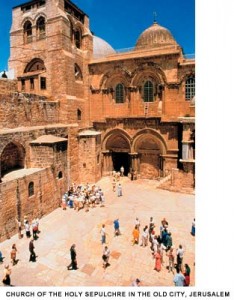 We will begin the day with a visit to the reconstructed Jewish Quarter, walk through the Cardo, the original Roman street, and see the amazing Israelite wall. See the important excavations taking place at the Western Wall and the Southern Temple Staircase. We have an opportunity to observe Jewish Bar Mitzvahs at the Western Wall (Mondays and Thursdays only). Then on to the Temple Mount and the Dome of the Rock, where Abraham was to sacrifice Isaac, and now the site of a mosque. Visit the Yad Vashem Holocaust Memorial and continue on to the miniature model of Jerusalem as it was in the 2nd Temple period (circa 68 A.D.). End the afternoon at Golgotha (Gordon’s Calvary) and the Garden’s Empty Tomb.  Special time is planned for worship, communion, meditation and inspiration. Dinner and overnight.

Today is at leisure for shopping and relaxing. Or some may choose to depart to Masada, overlooking the Dead Sea, where we ascend by cable car to visit the remnants of Herod’s Palace and where from 70 to 73 A.D. the Zealots made their last stand against the Roman Legions. Visit Ein Gedi, fabled Spring of David, and proceed to Qumran where the Dead Sea Scrolls were found in 1947. Time permitting, we will go for a swim, rather a “float”, in the salted waters of the Dead Sea. This evening we will share in a Farewell Dinner and the presentation of a Certificate of Pilgrimage to each tour participant.

Today we transfer to the airport. Our guide will assist us with check-in procedures.  We arrive home today with wonderful memories of a visit to the Land of the Bible!