The Lands Of Martin Luther

You are here: Home1 / Sample Pilgrimages2 / The Lands Of Martin Luther 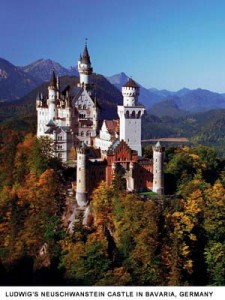 Depart from the U.S.A. on our flight to Europe. Meals and overnight on board. After dinner relax and enjoy the on-board entertainment.

Arrive at Frankfurt airport. Meet your tour escort and board your private motorcoach for transfer to Marburg, the first Protestant University in Germany. In 1529 the castle was the scene of the famous Colloquy of Marburg between Luther and Zwingli.

After breakfast, departure for Berlin with a lunch stop in Magdeburg, where Luther attended school in 1497. Late afternoon arrival in Berlin, a prosperous cosmopolitan city with a mixture of old and new.

After breakfast drive into the heart of Lutherland at Wittenberg, where Martin Luther first published his German translation of the New Testament. Visit the Augustine Monastery where the great theologian taught and lived, the impressive 15th century castle church on whose door he hung his 96 Thesis and where he is buried. Continuing in the footsteps of Martin Luther, drive on to Leipzig, where Luther and eight other Wittenberg professors came to debate with supporters of the Papal Authority in 1519. These debates marked a crucial point in the development of the Reformation.

Morning sightseeing of Leipzig including St.Thomas Church, where composer John Sebastian Bach worked. Also visit the Luther House, Luther Hall and the tombstone of Katharina Von Bora, Luther’s wife. Afternoon excursion to Eisleben, where Martin Luther was born in 1483 and where he died over 62 years later. Continue to Mansfeld where he spent his childhood. Return to Leipzig in the evening.

Leave Leipzig for Erfurt, a picturesque medieval city noted for its ancient bridge. Luther attended the University here and entered law school after graduation, although after 2 months of study he became a monk, when just 22. Sightseeing in Erfurt includes the Augustinian Monastery and its Luther Memorial, as well as the Cathedral and St. Severi’s Church.

Morning stop in Eisenach. Visit the Luther House, destroyed in 1944, but since rebuilt and which contains the Luther Room, historic Bible prints and other historic items. Short drive to visit the Wartburg Castle, where Luther spent 10 months after the famous Diet of Worms  in 1521. It was in this period Luther translated the New Testament into German. After lunch drive back to Wuerzburg, “City of Madonnas” and site of a peasant revolt of 1525.

Morning drive along the famous Romantic Road, highlighted by a stop in Rothenburg, the well-preserved medieval city. On a walk through the cobble stoned streets, discover unique and fascinating sights like St. Jacob’s Church with the Blood Altar by Riemenschneider and the 14th century ramparts, towers and gateways of the city. Afternoon arrival in Munich, the bustling capital of Bavaria.

A short morning sightseeing tour includes the most famous sights such as the Marienplatz, the Opera, the Olympic Park, the Frauenkirche and the Town Hall. On to Oberammergau, site of the famous Passion Play held every 10 years. Continue via Garmisch to Innsbruck, the famous ski resort and site of the 1964 and 1976 Winter Olympic Games.

Morning sightseeing of Innsbruck including the Imperial Gardens and the famous “Goldenes Dachl” made of gilded copper but which shines like gold. Afternoon at leisure for independent activities.

This day begins with a scenic drive through a land of mountains and lakes before crossing back into Germany. View the church at Wies then visit the spectacular castle Neuschwanstein, built by the mad King Ludwig II. Continue to Augsburg where Luther defended his 95 Thesis in a debate with Cardinal Cajetan in 1518. After a drive through the enchanting Black Forest arrive in Heidelberg, a university town divided in half by the Neckar River.

After a morning orientation drive of Heidelberg, including the castle with its ”Big Cask”, cross the Rhine and enter the city of Worms. It was here in 1521 that the Reformation came to a head in one of the most dramatic scenes in European history–the Diet of Worms. See the Luther Monument, which was inaugurated in 1868 and commemorates Luther’s appearance before the Diet. Continue to St. Goar to board a Rhine steamer for a 2-hour cruise to Bingen, from where the motorcoach returns to Heidelberg. Balance of day on your own. 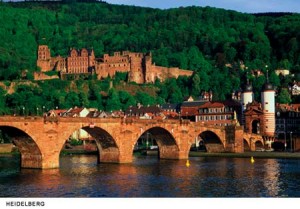 Bid farewell to Europe. Transfer to Frankfurt airport for return to U.S.A. with the privilege of having had the opportunity to walk in the steps of Martin Luther.