Turkey – The Seven Churches Of The Apocalypse

You are here: Home1 / Sample Pilgrimages2 / Turkey – The Seven Churches Of The Apocalypse 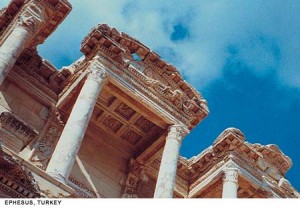 Depart from Los Angeles on our flight to Istanbul, Turkey. Meals and overnight on board. After dinner relax and enjoy the on-board entertainment.

Arrive in Istanbul and connect with our flight to Ankara, the capital of modern Turkey. Upon arrival we are met and escorted to our hotel for dinner and overnight.

This morning we visit Ankara including the Hititte Museum where we learn more about the Turkish and Anatolian civilizations. This particular Museum contains relics from Catal Hoyuk, one of the earliest known human communities, up through the Roman Classical period. We take an afternoon drive along the shores of the great Salt Lake to Cappadocia via the city of Seljuk. Arrive in Cappadocia for dinner and overnight.

While in Cappadocia we enjoy the unique landscapes of wind and rain eroded volcanic formations. We visit the amazing underground cities which are carved directly into the living rock. There will be a visit to the ancient underground churches carved into the rocks by early Christians. Many of these churches are decorated with ancient frescoes depicting scenes from the Bible or the Apocryphal. We visit the Fairy Chimneys, Goreme Valley, Villages of Uchisar, Avanos, Urgup and the ruins of Zelve. Dinner and overnight in Cappadocia.

Today we will drive through the beautiful countryside, following the ancient Silk Road, en route to the Agzikarahan Caravanserai and Konya. Konya is the biblical Iconium, one of the world’s most ancient cities. Paul preached in Derbe and Iconium and both cities are frequently mentioned in Acts. Upon arrival we visit the Mevlana Mausoleum and Museum, the founder of the Whirling Dervishes Islamic sect. Overnight in Konya.

Drive this morning to Pamukkale to visit the ruins of Hierapolis, celebrated for its warm baths and where St. Philip is buried. We drive to Laodicea (Rev. 14) to see the remains of one of the Seven Churches. Laodicea church was a branch of Ephessus, as were the churches of Hierapolis and Colossea. Proceed to Necropolis, the Temple of Apollo and the Theater. We end the afternoon at the snow-white petrified water falls of Pamukkale. Dinner and overnight.

Today we have a full tour of Ephessus, an important center of Christianity, though hostile to Paul on his two missions (Acts of the Apostles 17:16,34 and Revelations 2:2.) Visit and explore the Hadrian Temple, Library of Celsus, and Temple of Diana, one of the Seven Wonders of the Ancient World. Continue to view the Agora, the Marble Way and the Grand Theater. Paul stayed in Ephessus for two years to spread the word of Christianity. The Ephessus Church is the first one addressed in Revelations. Also, visit the Cathedral of St. John whose later life and death are associated with Ephessus. Late afternoon visit to the House of Virgin Mary, who spent her last days near Ephessus. Proceed to Izmir for dinner and overnight.

This morning visit Sardes (Revelations 3:1), the capital of Lydia where King Croesus ruled. Visit the Gymnasium and the Temple of Artemis. Later drive to Alasehir, Philadelphia, which was founded by Attalus II. Also known as the city of “brotherly love”; see the ancient city wall. Upon returning to Izmir, we visit St. Polycarp’s Church, which is the oldest church in Smyrna, and has symbolized the community of the Seven Churches of the Apocalypse (Revelation.) Dinner and overnight in Izmir.

Morning drive to Akhisar, Thyatira. The church of Thyatira had tolerated the works of Jezebel. Continue on to Pergamom, one of the seven churches and capital of a large and powerful pre-Roman kingdom. It is here that the first Christian was put to death by the Roman state. Visit the Church of Pergamom, the Homonym Church and the Acropolis with its pagan temples including the Altar of Zeus, which is mentioned as the “Throne of Satan” in the Book of Revelations. After visiting the Asclepium proceed to Assos and Troas where Paul set sail to Greece. Dinner and overnight in Canakkale.

This morning we visit the Homeric city of Troy, sight of the Epic struggle in the Iliad. Cross the Dardanelles by ferry boat and drive through battle grounds of Gallipoli. Continue to Istanbul. Once called Byzantium in the 7th Century B.C., the city was renamed Constantinople in 326 A.D. by Constantine the Great when he moved the capital of the Roman Empire to what is now Istanbul. Istanbul received its current name from Mehmet II in 1453. Istanbul is the only city in the world that spans two continents. Dinner and overnight in Istanbul.

In the morning we take a city tour visiting the Church of Chora, famed with Byzantine mosaics and frescoes. Visit the Blue Mosque which was commissioned by Sultan Ahmet in 1603, and was constructed with the deliberate intention of rivaling the St. Sophia Mosque, built by emperor Justinian of the Roman Empire. It was completed in 537 A.D. and ruled as the great Christian church in the world for more than 1000 years. St. Sophia, the Hippodrome of Constantinople, is the basilica of all times and seat for the ecumenical councils. Savor the exotic perfumes in the spice market, and practice your bargaining powers over ceramics or a fine carpet in the Grand Bazaar. Dinner and overnight in Istanbul.

Today we transfer to the airport. Our guide will assist us with check-in procedures. Depart on our flight to Los Angeles. We arrive home today with wonderful memories of a magnificent journey!