What are The Seven Churches of Revelation & Where are They Located?

The Seven Churches of Revelation- Then and Now?

While most Christians know Israel as the “Holy Land”, fewer know that Turkey has more Biblical sites than any other country. Over 60% of all places mentioned in the Bible are located in Turkey, also known as the Second Holy Land. This includes the sites of the Seven Churches of Revelation. The Seven Churches of Revelation refer to seven churches referenced by location in Asia Minor in chapters 2 and 3. These churches were a gathering of early Christian communities versus actual buildings or meeting halls. The scriptures point to historical and prophetic instruction to Christians as individual believers and as a body, thus known as the church. In these chapters lie both a correction and a warning to believers within the church but also words of praise as God understood what they were going through and provided them with encouragement. Historically these locations were considered major cultural hubs for various reasons such as trade, military and hedonism. The following gives history and scriptural reference to each of the seven churches within Asia Minor, known today as the country of Turkey, whose archaeological remains still exist in part to this day.

Known as the church that left its first love (Rev. 2:4) , Ephesus was also an influential capital city of Asia Minor on the Aegean Sea. This ancient city was home to the Temple of Artemis, one of the seven wonders of the world. Artemis, also spoken of as Diana by the Romans, was the goddess of fertility that supposedly controlled the reproduction of humans, animals, and crops. The Temple of Artemis at Ephesus was known throughout the ancient world for its temple prostitutes and hedonistic celebrations. Ephesus today is known for its huge metropolis of ancient streets, arches and ruins. 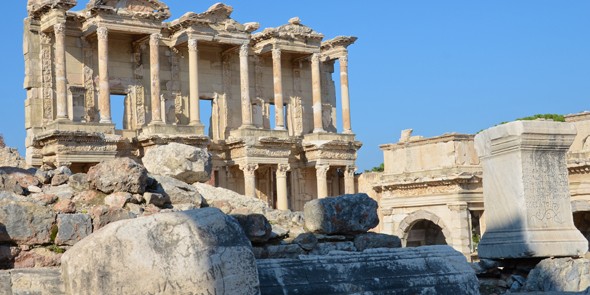 Smyrna was located North of Ephesus and established powerful trading position on the Aegean Sea because of its harbors, marketplaces and commerce. For three centuries it has been considered one of the most important cities in Asia Minor. Its primary ruins today are located in the Turkish city of Izmir. Izmir is the second largest city in Turkey which has helped to keep Smyrna from gross excavations. In the book of Revelation Smyrna is referred to as the persecuted church. (Rev 2:8-11)

Known as the worldly church that mixed doctrines (Rev 2:14-15), it was considered a major city in Asia Minor since the 3rd century B.C. and became a Greek and Roman hub for temple worship. Located on the plains and foothills along the Caicus River in Western Turkey, its ruins include the acropolis, the worship complexes known as Aesclepium and Serapeum, and a 10,000 seat amphitheater that is built into the side of a steep hill. The Temple of Emperor Trajan of the second century A.D. also exists there, excavated and restored; displaying a library that is the second largest next to Alexandria, Egypt in the ancient world.

The church of Thyatira was known to have followed a seductive prophetess by the name of Jezebel and thus referred to as the ‘false’ church. (Rev 2:20) Thyatira is located inland from the Aegean Sea in Western Turkey. This ancient city was known for its textiles and trade which was evidenced by numerous artifacts and inscriptions from various guilds. In Acts 16:11-15, a dye merchant is mentioned in Thyatira and Lydia. The archaeological remains of this ancient city reside in a fenced off city block in the heart of what is now known as the Turkish city of Akhisar.

Sardis was known as the ‘dead’ church or ‘the church that fell asleep’. (Rev. 3:1) Jesus spoke urging the church to ‘wake up’. Located on the banks of the Pactolus River and inland from Ephesus and Smyrna, Sardis was the capital of the Lydian empire and one of the most influential cities of the ancient world. Those who visit will now find ruins of lavish temples and bath house complexes.

Known as the church of brotherly love that endured patiently, (Rev. 3:7-10) Philadelphia was filled with a variety of temples and worship centers. It is located on the Cogamis River in Western Asia Minor and today is known as the Turkish city of Alasehir. Unfortunately, because of a series of earthquakes, there is not much left of Philadelphia and archaeology is limited to foundation stones and a few Roman columns.

The Church of Laodicea was known as the ‘lukewarm’ church which refers to the church as being neither too hot not too cold in faith. (Rev. 3:15) It is located in the Lycus River Valley and was a primary trading route between cultures both East and West. In ancient times Laodicea was primarily known as a hub for the Roman aqueduct system. Today it is not much of city but its Roman ruins are still found marking the countryside.

In summary, there are a few interpretations of what is being addressed here in the book of Revelations. Whether God was speaking specifically to the churches of ancient times or if the message was both a ‘then and now’ word for Christians as a church body and as individuals and yet still another perspective, that God was revealing a chronological development of church history; revealing the progression of the churches until the coming of the end of times. What we do know for sure is that by looking at each closing statement given to the churches it is written, “let he who has an ear, let him hear what the Spirit says to the churches”. Summarizing each message God spoke are as follows:

Ephesus (Revelation 2:1-7): Don’t lose your love for God’s truth or His people

Smyrna (Revelation 2:8-11): Remain faithful in the face of tribulation and poverty

Pergamos (Revelation 2:12-17): Resist Satan’s influence, even to death, if necessary

Philadelphia (Revelation 3:7-13): Persevere and walk through the doors God opens

Explore the 7 Churches of Revelation in our Journeys of Paul Through Greece & Turkey Tour and learn of the religious and social context of ancient biblical times. 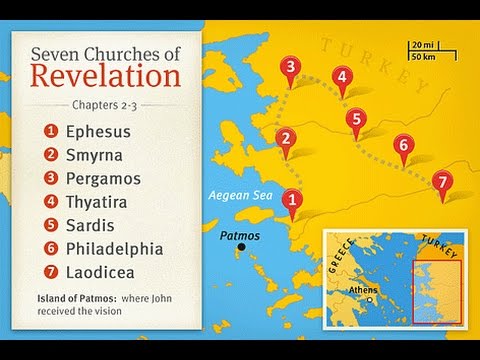 Is the Jezreel Valley the Stage for the Final Battle of Armageddon?

The Journey of Paul Through Greece